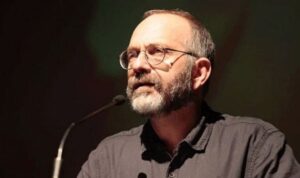 Joining the struggle for socialism in the ranks of the Workers’ Party of Turkey, Okuyan became active in the political group around the Socialist Power journal that was published in 1980. His first articles were published in this

journal. He is among the first members of the editorial board of Gelenek (Tradition) that started its publication life in 1986 as the result of a period of struggle.

Okuyan, who was among the leading cadre of the movement formed around the Gelenek journal, carried out central responsibilities in the process that transformed this movement into a party. Okuyan carries out various tasks in the Party for Socialist Turkey (STP) that was formed as a result of this process as well as the Party for Socialist Power (SİP) that was founded following the closure of STP. After SİP became the Communist Party of Turkey (TKP) on November 11, 2001, Okuyan served in the TKP as a member of the Central Committee as well as in various central roles. Okuyan is currently the General Secretary of the TKP.

Okuyan is one of the columnists of the Internet news portal soL and a regular contributor to Gelenek, the monthly theoretical publication of the TKP. In addition to co-authoring numerous books, Okuyan has also written eight books, namely, The Early Years of Soviet foreign policy, The Book of “What is to be Done”’ers, Understanding Stalin, Socialism’s quest for power in Turkey, Anti-Thesis on the dissolution of the Soviet Union, The Left cornered between Ergenekon and the AKP, The Patriotism test for Turkey’s left, and Under the shadow of the revolution: Berlin-Warsaw-Ankara 1920.

“Lenin and the Revolution, from February to October”

Turkey-US Relations: Are we getting independent?