“Your wars, our dead. No to the imperialist war”

“Your wars, our dead. No to the imperialist war”

On behalf of the Central Committee of the Communist Party of Turkey, I am saluting you with fraternity and sharing with you the militant greetings of your comrades in Turkey. It is a great honor to join this important event, which we consider as another building block in the long-term comradely and sincere relationship and revolutionary solidarity between our parties. Therefore, we thank you once again for your invitation.

Comrades, this event is taking place in the context of a war between imperialist camps. On the one side, Western imperialist forces who aim to preserve their hegemonic position within imperialism and on the other side, the Russian bourgeoisie, that is provoking nationalist hysteria, undermining the legacy of the Soviet Union and its achievements, and abusing “antifascist struggle”. This event is taking place in the context of barbarity in the 21st century, whose sole cause is the not-yet-overthrown capitalism. Who benefits from this war? Definitely not the working people. Definitely, not the ones who sacrifice! It is those who benefit from this war that want it to continue, maybe at a lower scale, but it doesn’t matter. Who benefits most out of what happened in the past three months, has been the NATO, US and EU, gaining strength, credibility, and new excuses for greater expenses, new cheaper workforce to exploit.

And comrades, this war, although currently limited to the geographical area of Ukraine, does bear the potential to spread and turn into a wider-scale, global war. If such developments happen, our countries will not be exempt from this. This is why, we should prepare ourselves to fight against the participation in such wider wars, explaining each and every day, tirelessly, why they are illegitimate and totally against the interests of the people. In this regard, today’s event is an example of our persistence, and let us hope that a greater number of workers will better understand the games played out of their lives, in order to counteract these games.

Let us briefly remember. NATO was founded in 1949, spearheaded by the US government and the participation of Britain, Canada, France, Italy, Norway, İceland, Portugal, Belgium, the Netherlands, Luxembourg and Denmark. In 1952, 70 years ago, Greece and Turkey joined it. Our soldiers, young people, whose lives were worth less than 23 cents for these, whose lives were lost in the Korean War had been the bribe of bourgeois governments to join this dirty association. In 1955 West Germany, and in 1982, Spain became members. NATO’s function was to continue to job of Nazi fascists who couldn’t succeed in bowing down the heads of brave working people during the Second Imperalist World War, but this time under a different cover, under the false facade of the so-called “free world”. Despite sayings like protection or security, its real mission was to combat the will of the working class to establish equality and freedom in this world.

NATO was founded as a military organization, but it would be a big mistake to think that it is limited to this aspect. For years, NATO has acted as a regulatory mechanism within the imperialist hierarchy, with ideological, political, cultural missions. The counterrevolutionary groups, Gladio structures, underground gangs especially targeted leftist oriented people, intellectuals, youth and workers, conducting barbaric crimes and getting away with them. NATO’s founding base is anti-communism. We will never forget their crimes and fight until the day that they are punished. We will not forget the lawyers of Atocha, the bombings in Milan and Bologna, the crimes against the Greek people during the Civil War, nor the mass murders against patriotic intellectuals, socialist politicians of Turkey!

NATO has been nurtured by the roots of social rottenness in all member countries: Nationalism, chauvinism, violence, torture, misogyny, drug trafficking, plunder… All under the name of “security” “special forces”, “irregular warfare” and so forth. They were behind the coups and oppression. NATO is the biggest terrorist organization on the world’s territory.

While until 1990s, the aim of this alliance had been the encirclement the Soviet Union, after the downfall of the first workers’ state, it turned its route towards more east, increasing the number of its members and expanding its sphere of influence. The first bloody outcome of this policy was the disintegration of Yugoslavia, escalating enmity between peoples who were living in peace together for years. The region is now subject to imperialism, socially and economically dominated by imperialist forces. In continuation, in the Middle East, Africa, Afghanistan, they pulled the triggers of wars and great damages, especially against countries who were not fully or partially complying with their greedy policies. Now they are trying to expand even more, competing with capitalist Russia and its allies. Let us keep in mind that imperialism is an order of competition, and contradictions between the forces that exhibit an uneven development, eventually end up in conflicts, may that be military or non-military. What we are observing is not unforeseen for those who study with Marxist-Leninist principles. The key is, of course, to study and to act against them!

Allow me to share with you that your efforts here also have their counterparts in Turkey. In the past weeks, we held anti imperialist events in different cities, together with the comradely participation of KKE leaders, disclosing the true interests of NATO, US and EU against the peoples. We also recently finalized a petition in the south region of the country, where the ominous İncirlik Air Base of the US forces is located. The Communist Youth of Turkey organized a protest march against the Base, despite police repression, voicing their demands for an independent and sovereign country and an equal future.

We are against the presence of this US-Base in our country and the nuclear weapons it contains, which is a threat to the lives of the people of the region and the whole country, as well as the wider region. We are against the placement of all nuclear weapons, known or implicit, old and new. We do not want our soldiers to be sent to missions abroad, nor the soldiers of other countries in our territory. We want the young people who have been under arms in Albania, Kosova, Iraq Syria, Afghanistan and in many other missions abroad, in the name of “security collaboration” to withdraw and come back1 We do not want any military or other competition with brother peoples! We do not want our lands and seas to become lands and seas of war and blood!

Despite some daily tactical moves and rapprochement with the Russia-China-Iran axis or creating superficial conflicts with EU and US with regards to the Eastern Mediterranean, Cyprus and Libya issues, the ruling AKP government has been a pro-Western, pro-American government since the beginning. It represents a continuum in the collaborative tendencies of the Turkish bourgeoisie as the outpost of imperialism in the region. Yet when we look at the other side of the political spectrum, and examine how the opposition reacts to these issues, we see that the social democrats in Turkey are defending NATO with even greater fervor, referring to this bloody alliance as the “guarantee of democracy”. Their allies, the nationalist reactionaries who are at the moment competing with Erdoğan’s policies, are making “promises of commitment” to NATO.

We know that the bourgeois parties do not have solid principles, nor they place their political programs in a fundamental place, but even if so, when you look at the programs of the parties in the parliament, you will see that all of them support the Euro-Atlantic line, and the integration of the country to NATO. Their seldom tactical moves or discourses against wars does not change this fact. NATO is, and can only be the guarantee of the dictatorship of the capital. NATO is the guarantee of the profits of monopolies. NATO is the guarantee of increasing rates of exploitation. And one cannot be patriotic and defend NATO membership at the same time! One cannot defend staying in NATO and objecting its policies simultaneously!

We are well aware of this hypocrisy. It is the same in each and every capitalist country, in Spain, in Turkey, in Greece, in Sweden, Britain or the US. We are seeing that social democrats are turning down their already little voices, if they have any, when it comes to the “international politics”, sending warships or air forces at the service of NATO. Especially if they are within or near the ruling circles…

On the other side of the medallion, we see the reflection of the hypocrisy of bourgeois politics in Russia, with all its main pillars, anti-communism, nationalism, demagogy, distortion of the historic facts and lies.

This is why, in such times where many illusions are fabricated, we have to stick with greater strength to our principles. We won’t side with bourgeois forces, neither the seemingly more authoritative ones nor the more liberal ones. We won’t choose between axes competing for dominance in the imperialist system. We won’t let our history be denigrated.

I can clearly see, with your presence here, that the patriotic and revolutionary workers of Spain are against the presence of NATO forces in their country! Because “it is their wars and our dead”. It is their wars and our hunger, poverty, misery, forced displacement. It is their profits and our losses. We reject this injustice. We reject a bunch of rich capitalists to make decisions on the lives of millions. Struggle against NATO means struggle for peace, but also for bread.

We promise that we will continue organizing the working people of Turkey, warning against the growing danger and making every effort to counter the attack of imperialism against peoples, raising the banner of internationalism. We have no doubt that our comrades in Spain will make their best efforts in the same direction and our joint struggle will grow.

We wish you success in your struggles!

Long live the fraternal relationship between our parties! 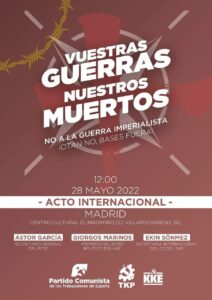