Two years ago, when we completed a successful meeting in Izmir and agreed to meet in 2020 in Pyongyang, the capital of the Democratic People’s Republic of Korea, none of us could have foreseen that shortly after the world would face an unprecedented pandemic. Without a doubt, each of us is aware of the instability and crisis-producing structure of capitalism, and we are also aware that the balances can change very quickly in class struggles. Additionally, as part of the nature of our responsibilities, we are ready to face radical changes, and in general we like dynamism rather than stagnation.

But we must admit that the attack of capitalism came from a place we did not anticipate, and we failed to take enough initiative internationally to get the working class to come up with the necessary response. The pandemic itself, the coronavirus, can be part of nature. But there are purely class reasons for the situation in which humanity finds itself facing this pandemic. More importantly, with the epidemic, the capitalist class made an extremely correct move on its behalf, launching a new attack on the already shrunk rights of the working masses, and at the same time they wasted no time in turning the pandemic into an opportunity for new profits.

On behalf of TKP, I would like to say this. “The actuality of the revolution” has always been the main motto of our party, we have launched our political and organizational initiatives accordingly, and even in the darkest days, when we were preparing, we never said ”it is too early to think about socialism in Turkey yet”. However, the pandemic has shown us that we are not vigilant enough, that we may encounter developments in the class struggle that we could never have foreseen before. Admittedly, TKP, like many of the parties here, defended the rights of workers in the face of the epidemic, supported them, organized aid campaigns, stood up to the capitalist class, stood against superstition and hostility to science, questioned from a radical perspective the hegemonic behavior of the pharmaceutical monopolies in the field of health and the hegemonic behavior of the imperialist countries.

However, the shortcoming here is the lack of existence of an international communist movement that will bring the helplessness and exhaustion of capitalism to the consciousness of large social segments, and make use of the multidimensional crisis that is being experienced for a revolutionary rise. Unfortunately, we have to admit that it is not possible to compensate for this deficiency. There has never been a period in the history of our planet that has exposed inequalities and injustice so nakedly and more clearly proved how foolish the established order is. Unfortunately, we can not say that we have made good use of this historical period, which had an opening for the socialist option to make itself felt strongly.

However, this period is not over yet. In fact, there are many reasons to think that the corona pandemic reflects the spirit of the coming years very well. Instability, multi-layered crises, regional wars, the threat of a larger war, racism, massive migration movements, rapid exhaustion of political parties and leaders, severe impoverishment, capital movements at unprecedented speeds, mysticism, destruction of the environment… From one perspective, all these could be seen as reasons for the working class to remain in a “defensive” position. Therefore, the communist movement can put forward a strategy centered on the unity of the broadest forces, the struggle for human rights, and raising the demand for peace as its primary task.

We all know that this strategy is not new. Each of the points I listed before is undoubtedly important. It is unthinkable that elements such as democracy, human rights and peace should take the back seat in the struggle of the working class. On the other hand, it should be known that with a strategy that gives capitalism the right to exist and gives it legitimacy, forget about achieving any remarkable success, it will not even be able to prevent the loss of positions that are the product of the revolutionary moves of the 20th century.

There is not a single historical achievement that we can justify for the defensive/protective position of the world communist movement. Nobody can say that we have gained a wider democracy, a more peaceful world, an environment of more freedoms in exchange for the withdrawal of the goal of socialism.

Presumably, no one here thinks that the Communist Party of Turkey is proposing an adventurous, uncalculated, irresponsible and fanciful strategy in the given balance of forces. Of course, we know that the revolution cannot be created by willful efforts, and that the objective possibilities that will arise cannot be evaluated without attaining a deep-rooted and widespread strength within the working class.

However, we must not forget that covering up the goal of socialism and focusing on the gains for capitalism is a bigger adventure for humanity, considering today’s conditions.

No one can predict when the current unstable course of capitalism will lead to widespread shocks and social explosions. Well, can we say that the working class can leave its mark on such an upheaval if the communist movement, the bearer of the flag of socialism, is off the agenda of the working class and accepts this decline?

No, we can not say that. If communism does not make its ideological and political weight felt again in the international arena today, it is clear where the widespread discontent and anger will flow into: Today racism, right-wing populism; and maybe fascism tomorrow! 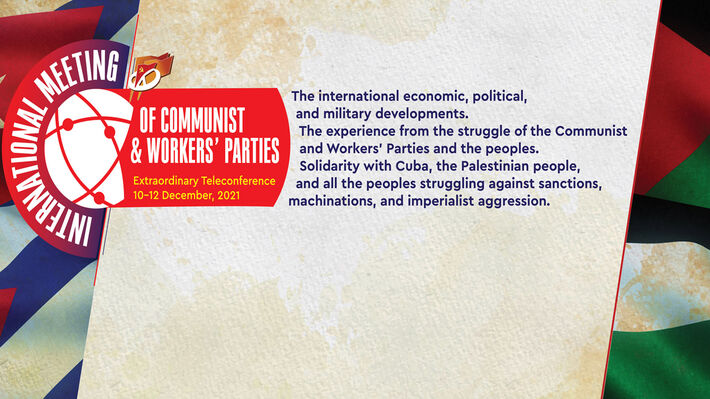 The only way for communism to gain ideological and political weight today is to oppose capitalism with a clear/simple social project. This project should inspire confidence, arouse excitement. For several decades after the collapse of the Soviet Union, the sentiment that “socialism was destroyed anyway” was widely accepted. But the destructive nature of capitalism and its failure changed this sentiment. Moreover, for today’s younger generations, the aggression of the counter-revolution and the imperialist world is the only reality they know. And therefore, they are hopeless, helpless.

Now is the time to bring forward the socialist alternative.

It is much easier today to combine daily struggles with a study in which hostility to private property in the means of production is openly expressed, and what an egalitarian social order can do on topics such as education, health, transportation, nutrition, and housing.

For several years, TKP has been trying to correct some of the mistakes that kept it away from the working masses, and to change its language and working style. I can say that we are starting to get results. But we have just started… Our party spread all over the country, opened new District Houses in more than 50 working-class neighborhoods during the pandemic period, initiated numerous vanguard actions, and is conducting an effective campaign to create a focus in the country’s politics other than the two bourgeois blocks that were brought before the people.

While doing all this, we witnessed that the emphasis on socialism and the actuality of the revolution did not distance us from the people, but on the contrary, it increased our organizational potential within the working class, provided that we continue to act with the right instruments.

The economic crisis in Turkey has entered a new phase with the incredible degree of loss of value of the Turkish lira. Communist Party of Turkey organizes street demonstrations in working-class neighbourhoods and at the same time, we are trying to foster the organizational capacity of the working class at workplaces for the tough days to come. We are observing in these efforts that many workers who had had conservative, Islamist or even nationalist inclinations anteriorly are now listening to and endorsing an uncomplicated explanation of socialism.

We have a tough electoral process ahead of us. Of course, the TKP knows that the bourgeois opposition bloc formed against Erdoğan can use the anti-Erdoğan sentiment in the society as a trump card and block a revolutionary option. In this respect, we also know that a TKP that holds its head high in the elections will quickly become a center of attraction in the difficult period that will emerge immediately after the election, regardless of the election results. For this reason, we will never be a part of the bourgeois opposition bloc formed by the guidance of the imperialist countries and the capitalist class.

It is not the task of the communists to give the green light to solutions for capitalism. We greet you with this determination.

May success be with the Cuban people and Cuban communists resisting imperialism!

May success be with the Palestinian people and all those who are struggling for equality and freedom in all parts of the world!

Down with the barbaric order that is called capitalism!

May our struggle continue successfully, comrades…