Meeting for the Republic in İzmir

The event of TKP, which is dedicated to the 100th anniversary of the Great October Socialist Revolution led by the Bolsheviks in 1917 and the 94th anniversary of Republic of Turkey’s foundation in 1923, attracted considerable attention despite rainfall with the attendance of thousands of TKP members and friends.

The event, ‘Socialism will suit very well to the “republic”‘, started with a performance on the October Revolution in 1917 and its achievements for humanity.

In the course of the performance an actor symbolising Greek soldiers who opposed the imperialist campaign read a message. Noted in the message that the Greek communists had distributed thousands of leaflets among Greek soldiers against imperialist aggression during the invasion of İzmir by the Greek capitalist exploiters.”The fraternity of our peoples started in those days and continues today against imperialism, against the exploitative capitalist class. This is also the basis of friendship between our political parties. We want to overthrow capitalism and found a socialist republic.” continued the message.

Kemal Okuyan, the General Secretary of the TKP, took the stage and started his words by saying: “Modern history starts with a great revolution; The French Revolution, in 1789. It has almost been 230 years. This revolution opened way to the foundation of the first Republic in France, in 1792.”

“In Turkey we also have roots in 1923. The Communists have always been republicans. Yes, the republic that was built with a revolutionary spurt firstly  sneakingly got rotten then ruined, by the same forces, the reactionaries. The question itself is wrong. The question of when did the communists become republicans. We were always here.

But why? What is the meaning of the Republic for the communists, so that they historically, in the past and today, stand by the republic? Republic means popular will, that represents not the God nor the dynasty but the People. Kings, sultans, shahs, sheikhs, tsars they all rule on behalf of dynasties or God. Instead the popular will has two aspects. The people are equal and not governed by religion. If the holy one gets in the way, there is no longer a republic. Look, we are talking here. We are challenging the exploiters, the imperialists. But, as they squeeze they are hiding behind their sacredness. Why so? Because as the name implies, the sacred is inviolable. We cannot interfere with the religious beliefs of the people but just because of this deceit we have to pull the pin of the ones that are hiding behind religion.” Okuyan continued.

Kemal Okuyan cited some articles from the “Socialist Constitution”, a basic constitution draft prepared by the TKP, which will enter into force in socialist Turkey saying  “we have to build a new one, not to be demolished again” .

The GS continued his words as follows:

“…Factories, farms, forests, natural treasures (both underground and not), shall be under the possession of the working class. This event started with these words; from just the beginning of the October Revolution in 1917.  ‘Workers, be watchful and guard like the apple of your eye your land, grain, factories, equipment, products, transport- all that from now onwards will be entirely your property, public property’.

How nice. Workers, guard your factories, land and grain. Because these belong to the workers. After reserving the share for the needs of the society the whole value of the production shall be paid to the workers. What is this share? Education, health, dams, investments for new technologies, parks, cultural palaces… Not a penny to Koç, Sabancı, Ağaoğlu and the rest exploiters. Not a penny to the Palace. This is what we shall do: Stop the leakage. And we will have the sources for building a developed classless society.“ 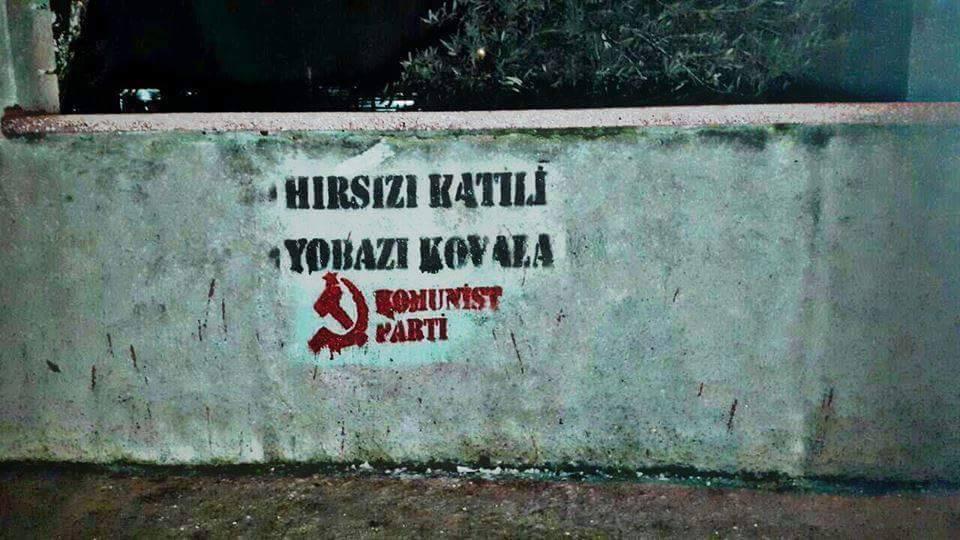 Saying “…people have the right to live in environments in which they can re-create themselves...”, Okuyan completed his speech as follows:

‘...  During the day not being exploited, at night not sleeping hungry, as Nazim Hikmet said.

Do we want this?

On 1917 the people that believed in this, took action. In the Soviet Union all the above started being real. They passed the sea but they got drown in the river. They made some mistakes, they underestimated the enemy, i.e. the imperialism, the capitalism. The Soviet Union was demolished…

So, what shall we do? We shall build another, stronger republic. Socialism will suit very well to the “republic”.’ 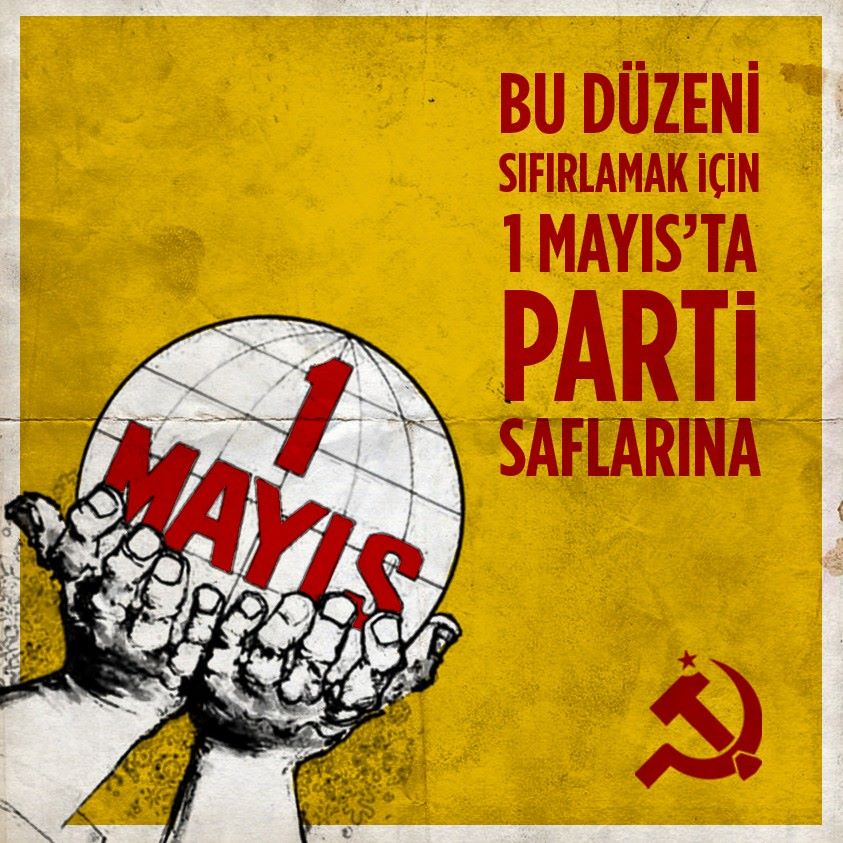 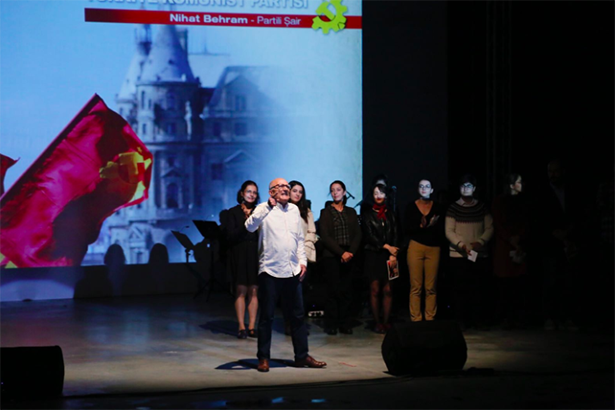 Poet Nihat Behram, reads his piece ‘Dövüşe dövüşe yürünecek’ (There will be walking accompanied with fights). 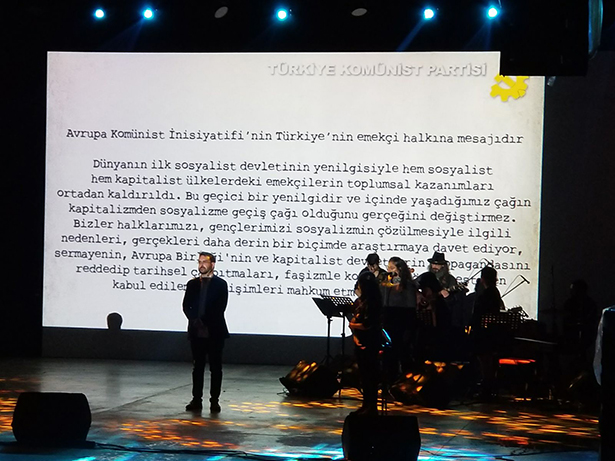 The decleration of the European Communist Initiative saluting the Great October Revolution was also read and shared in the event. 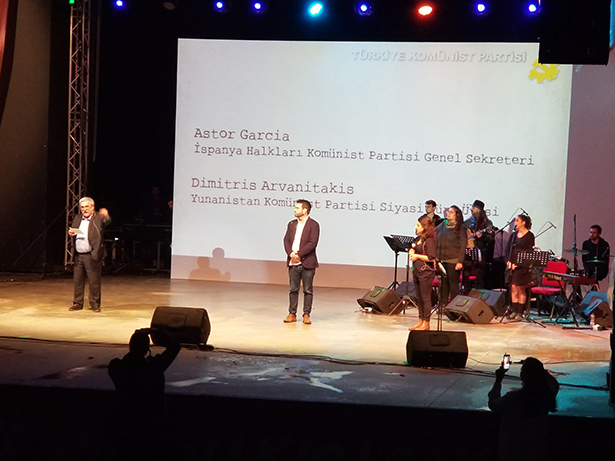 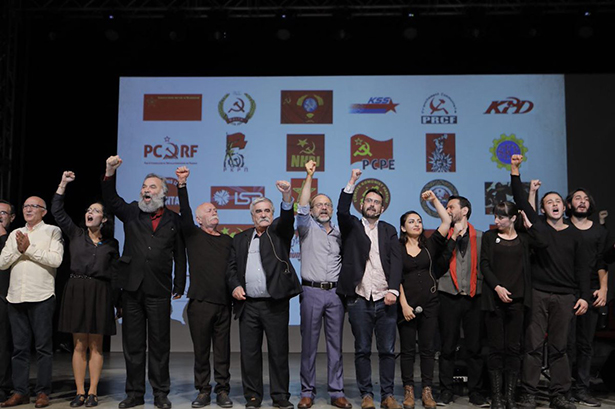 The event closed by the International Anthem voiced by all…